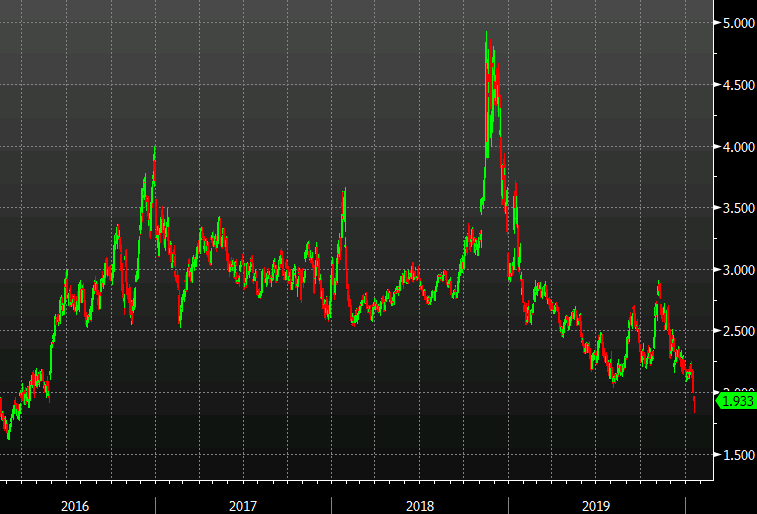 Down 37% since November and 18% since last week

Henry hub natural gas prices fell as much as 8% today at the the open in what looks like a run on stops. It has since trimmed the decline to 3.4% but the outlook and the chart aren’t pretty.

The problem is that shale oil producers are pumping increasing amounts of natural gas into a market that doesn’t want it. In some places, as much as 20% of gas is simply burned off, in a practice called flaring.

In the long-term, the hope is to build export facilities for liquefied natural gas but the infrastructure to pipe, qualify and export it isn’t in place. Rather than leave the resource in the ground, US producers — many with high debt loads — are producing it anyway in order to justify stock prices.

The problem is that low gas prices could make the problems worse. Companies will be forced to mark down the value of their natural gas reserves and in some places, it makes entire fields worthless.

A warning sign came in December when Chevron wrote down a whopping $11 billion in assets, including virtually its entire natural gas holdings in the Marcellus/Utica basins.

What’s frightening is that many producers in better fields like the Eagle Ford, Bakken and even the Permian basin are showing signs of producing more gas and less crude.

Compounding the problem this year is that winter in the US has been unusually warm.

Add it all up and the result is a potential bust and fall to the 2016 lows (or beyond).

NZDUSD runs up to the 100 hour MA as it follows the AUDUSD
Has the USDMXN run it’s course? Here is what has to happen to call the all-time high.
I’m coming around to the idea that the only useful coronavirus number is deaths
Trading the Daily Forex Chart: Forex Trading 101
Forex $2,500 In My Sleep | Tradersway Withdrawal 2020 | Forex Trading 2020